skip to main | skip to sidebar

The Grimm Version of Briar Rose

Little Briar-Rose, or better known as Sleeping Beauty, is the tale of a princess who pricks her finger on a spindle and falls asleep for a hundred years. At her birth Little Briar-Rose's father decided to celebrate his daughters birth with a feast, however he only had enough golden plates for twelve out of the thirteen wise women. When the 13th found out about the celebration she came, avenging herself, to the celebration and cursed the child, "'The King's daughter shall in her fifteenth year prick herself with a spindle, and fall down dead'" (237). Thankfully, the 12th wise woman hadn't given her gift to the child yet and lessened the brunt of the curse to a slumber of a hundred years. King's sons heard about the princess and tried to rescue her, however a hedge of thorns, that grew around the castle, stopped and killed many of the king's sons. It wasn't until the one hundred years passed and another king's son came to rescue her that the thorns turned to flowers and allowed him to enter safely the castle and awake her with a kiss. They married and lived contently for the rest of their lives. Now, this doesn't seem like a story that has much to it, however...Her name, Little Briar-Rose,is a thorny shrub that often have roses. The significance is connected with the fact that a hedge of thorns grow around the castle when she falls asleep. A little bit of a foreshadowing hint.In fairy tales, there is often something that is called doubling factors that are presented. And, this fairy tale isn't an exception. The spindle on which she pricks her finger is doubled by the thorns that kill the princes. These, the spindle and thorns, are a symbol for curiousity. Because Briar-Rose was curious she fell asleep for a hundred years, and becuase of the princes curiousity they suffered painful deaths.

The ideas that are trying to be presented through all of this is that things must run their course, and that curiousity can be fatal. Brain and brawn cannot overcome what is destined to happen and time will pass as well as certain events and all people can do is wait. This is displayed by the fact that the thorns turned to flowers only after the one hundred years had passed. The prince awoke Briar-Rose because the time was right.

The Grimm Brothers are very blunt and get straight to the point using shorter sentences that aren't filled with wordy descriptions. Their works are also violent as to insure the idea they are trying to present.
Posted by DUH! nicole. at 4:11 PM

A land of meaning. 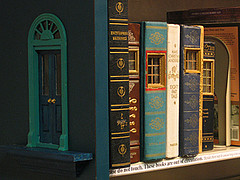 "Some day you will be old enough to start reading fairy tales again."- CS Lewis